Ok.not really but it may as very well be , our concept of what time is has never been absolutely clear and any number of philosophers and physicists have been grappling with that very question for decades ; what I present here is adapted from a presentation I gave in my freshman year that may shed some light on what we may be saying when we talk about time.I will touch on two things the block universe model and the quantum model.

Our senses tell us that time flows: that the past is fixed, the future unknown, and reality lives in the present the present moment has special significance. It is all that is real.As the clock ticks,the moment passes and another comes into existence–a process that we call the flow of time e.g The moon, is located at only one position around Earth.Over time, it stops existing at that position and is found at a new position.

Classical Physics and the standard model

“Classical physics” refers to the Newtonian physics which preceded relativity, i.e. the branches of physics based on principles developed before the rise of relativity and quantum mechanics.

Before the discovery of quantum mechanics, the framework of physics was this: If you tell me how things are now, I can then use the laws of physics to calculate, and hence predict, how things will be later.In this model put forward by Newton the three spatial dimensions and the one time dimension are absolute.What proponents of quantum theory have shown is that this is not so with distances and durations arent absolute but are affected by motion, this new model could have upto tens of spatial and time dimensions.This is beyond the scope of this piece but a good source is Brian Greene’s , “The Fabric of the Cosmos” , to whit the proponents of quantum theory claimed, reality consists of a haze of all possibilities – all trajectories – mutually commingling and simultaneously unfolding. And why don’t we see this? According to the quantum doctrine, when we make a measurement or perform an observation, we force the myriad possibilities to ante up, snap out of the haze and settle on a single outcome. But between observations – when we are not looking – reality consists entirely of jostling possibilities.

This is not to say that the Newtonian model was/is wrong , quite the opposite really for macroscopic events it holds remarkably well and that is the eason to date its still a part of most school curriculae whereas quantum theory which can be thought of as a finer instrument can more accurately explain the microscopic phenomenae existing at the atomic scale and at velocities smaller than the velocity of light.

Ideally by now we should have already begun incorporating the discoveries of the past decades into our collective as it would go a long way towards clarifying a host of contentious issues from time travel , teleportation to determinism.

So what time is it

“The past, present and future are only illusions, even if stubborn Ones.” – Albert Einstein

Einstein’s conclusion came from his special theory of relativity, which denies any absolute, universal significance to the present moment. According to the theory,simultaneity is relative. Two events that occur at the same moment if observed from one reference frame may occur at different moments if viewed from another.For the physicist, time is simply what (accurate) clocks measure.We dont really observe the passage of time what we notice is the that later states of the world differ from earlier states , as a result of entropy which gives us the “arrow of time” ; as a consequence of entropic decay where a stable systems tends towards disorder from an ordered state is the reason we are able to distinguish between past present and future.Entropy as a force is also suspected to be responsible for gravity according to ongoing research.

From some researchers (according to the classic model)comes the conclusion that all of eternity is laid out in a four-dimensional block composed of time and the three spatial dimensions.

“past” and “future” may be used as directions, just as “up” and “down” may be applied to spatial directions, but past or future are as meaningless as referring to the up or the down, the time of the physicist does not pass or flow. 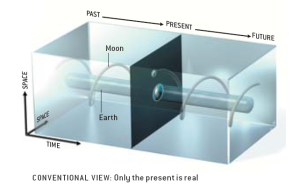 The quantum model and altenate timelines

“God does not play dice with the universe.”

Picking up on the relativistic probabilities and special relativity of Einstein allows for parallel timelines to be a possibility.For example , A person living on a planet called Earth, with misty mountains, fertile fields and sprawling cities, in a solar system with eight other planets. The life of this person has been identical to yours in every way until now, that is, when your decisions signals that your two lives are diverging.

The idea is that any choice made in this universe results in the creation of another universe where an alternate choice was made.

When discussing parallel universes, we need to distinguish between two different ways of viewing a physical theory: the outside view or bird perspective of a mathematician studying its mathematical fundamental equations ant the frog perspective of the observer going about her life.

From her frog perspective, however, each observer perceives only a tiny fraction of this full reality: she can only see her own Hubble volume (Level I) .When asked a question, makes a snap decision and answers quantum effects at the neuron level in her brain lead to multiple outcomes, and from the bird perspective, her single past branches into multiple futures.

From their frog perspectives, each copy of her is unaware of the other copies.Afterwards, there are multiple copies of her that have the exact same memories up until the point when she answers the question and divergence occurs.

View all posts by apparatusd